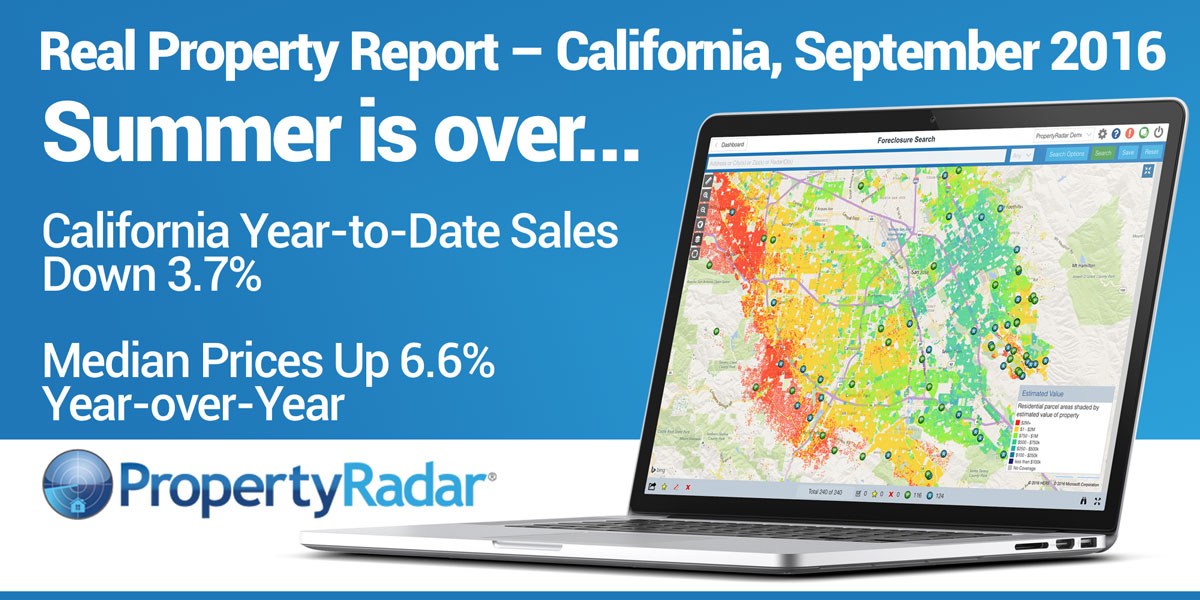 The Fall Slide into Winter

“The normal seasonal sales decline began in September so taking a longer term view gives a complete picture of the market,” said Madeline Schnapp Director of Economic Research for PropertyRadar. “Sales from January through September fell 3.7 percent compared to the same period in 2015, the lowest since 2011. Despite lower sales, prices continue to climb higher albeit at a slower pace than prior years.”

Within the 26 largest counties in California, on a year-ago basis, prices were higher in all but three counties. The counties with the largest annual gains were Monterey (+18.1 percent), Marin (+14.1 percent), Sonoma (+10.5 percent), San Bernardino (+9.4 percent), Santa Barbara (+9.1 percent).

“The counties surrounding the San Francisco Bay, an hour away from San Francisco and Santa Clara, are showing some of the largest price movements,” said Schnapp. “Conversations with real estate agents in those surrounding areas indicate an increasing number of Bay Area workers, willing to brave long commutes, are seeking housing in these lower priced counties.”

“In yet another year plagued with lackluster sales and rising prices, the lack of inventory was a common theme up and down the state," said Schnapp.   "Restrictive zoning laws, rising building costs and limited affordability are keeping a lid on supply.  Fortunately, rising single-family permits and starts in many areas throughout the state promises to provide some relief in 2017.”

“The silver lining in rising prices is it allows underwater homeowners to escape their negative equity prisons,” said Schnapp. “These newly freed homeowners can now refinance, taking advantage of near record low interest rates, or sell their home or buy another and become active participants in the housing market.”

Look for our Focus on Bay Area Real Estate report next week.

California real estate data presented by PropertyRadar, including analysis, charts, and graphs, is based upon public county records and daily trustee sale (foreclosure auction) results. Items are reported as of the date the event occurred or was recorded with the California County. If a county has not reported complete data by the publication date, we may estimate the missing data, though only if the missing data is believed to be 10 percent or less.