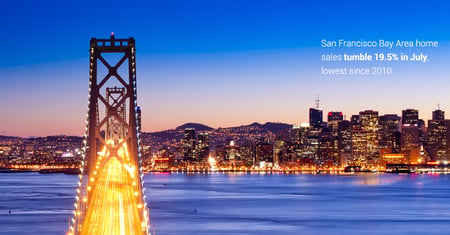 “San Francisco Bay Area home sales took a tumble in July, the lowest July sales since 2010 and the biggest June-to-July decline since 2006,” said Madeline Schnapp, Director of Economic Research for PropertyRadar. “While a sales decline in July is expected as we approach the end of the prime selling season, home affordability remains a persistent drag on the market with no end in sight.”

At the county level, July 2017 sales were down from July 2016 in eight of the nine Bay Area counties. San Mateo, Solano, and Sonoma counties posted the largest annual declines of 16.2, 15.6, and 13.9 percent, respectively. Marin County was the only county that posted an annual sales gain of 6.1 percent.

“The large double-digit decline in Marin County seems to be an artifact of an unusually large number of short sales in the under $500,000 price range,” said Schnapp. “When those are removed from the database for the median home price rises significantly.”

“The median home price declines in the other counties suggest that we may be bumping up against a price ceiling,” said Schnapp. “The retreat from the median sales price peak of $1.4 million for a two-bedroom, one-bath San Mateo County home built in 1946 was likely a median price point peak for the season.”

“Smart investors and homebuyers recognized that Vallejo, whose July median home price was $385,000, nearly 70 percent less than San Francisco’s, presented an interesting value proposition,” said Schnapp. “Vallejo’s secret weapon is the San Francisco Bay Ferry system that transports commuters from Vallejo to downtown San Francisco in an hour. Grab a cup of coffee, sit down next to a window and connect your laptop to the ferry’s WiFi system and watch some of the most spectacular scenery in the world roll by at 40 miles per hour. It’s no wonder that Vallejo real estate is popping.”

“Given the fact that economic growth fundamentals are unlikely to change anytime soon, for the savvy real estate investor or buyer that can tolerate a longer commute, there is still plenty of value out there in counties within striking distance of the San Francisco Bay Area,” said Schnapp. “Nosebleed prices in the Marin to San Francisco to Silicon Valley corridor are beginning to falter as buyers migrate to neighboring counties or out of the area in search of more affordable housing.”

San Francisco Bay Area Home Sales – Total Single-family residence and condominium sales. Sales are illustrated by month from 2005 to current and are divided into distressed and non-distressed sales. Distressed sales are the sum of short sales, where the home is sold for less than the amount owed, and REO sales, where banks resell homes that they took ownership of after foreclosure. All other sales are considered non-distressed.

San Francisco Bay Area Year-to-Date Home Sales – The sum of January through May sales of single-family residences and condominiums for the current year and prior years divided into distressed and non-distressed property sales.

With a mission to make targeted local marketing easy, PropertyRadar is the leading property market intelligence and direct marketing platform for California Investors, Realtors®, and Real Estate Professionals who desire to leverage enhanced public records data to grow their business.

Over 10,000 Realtors®, Investors, and Real Estate Services Professionals have turned to PropertyRadar in CA, AZ, NV, OR & WA to discover market opportunities and connect with their prospects.