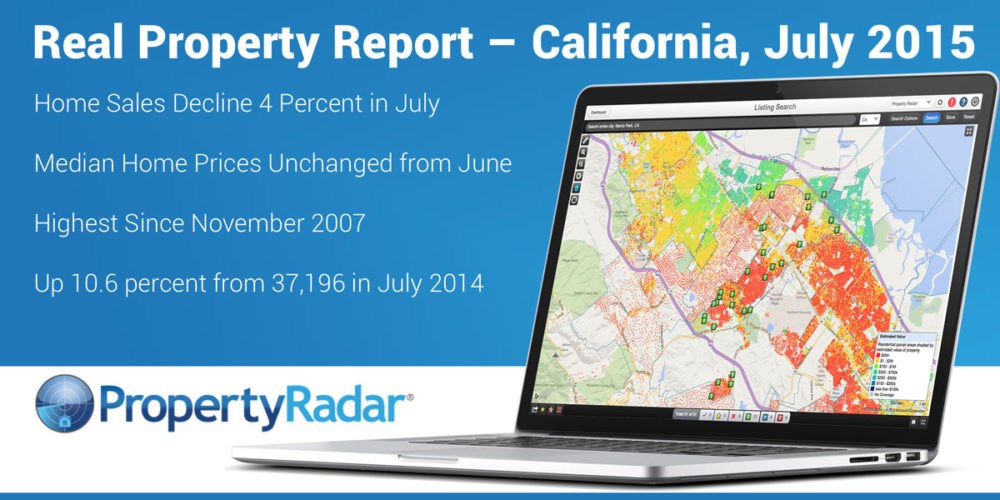 CALIFORNIA, AUGUST 19, 2015 -- California single-family home and condominium sales fell 4.0 percent to 41,143 in July from 42,872 in June but were up 10.6 percent from 37,196 in July 2014. Driving the increase in year-over-year sales was the 14.2 percent increase in non-distressed property sales. Meanwhile, distressed sales retreated 6.6 percent. Despite the July pullback, distressed sales have trended mostly sideways for the past 18 months and remain a source of opportunity.

“After a better than expected showing in June, California real estate sales took a breather in July,” said Madeline Schnapp, Director of Economic Research for PropertyRadar. “In our May report, we forecast that high prices may limit sales in the last half of the year. So far, July sales appear to support that conclusion.”

On a year-over-year basis, the median price of a California home was up 4.3 percent from $399,000 dollars in July 2014. Despite the slowdown in price appreciation, at the county level, year-over-year median price increases exceeded 5 percent in 17 of California’s 26 largest counties and 6 of those experienced double-digit price increases. The counties with the largest annual price increases were Kern (+11.1 percent), San Francisco (+15.4 percent), San Mateo (+23.3 percent) and Stanislaus (+12.6 percent).

“High prices have put a brake on sales,” said Schnapp. “Realtors in several northern California coastal counties have reported that asking prices have been lowered to attract buyers. That’s good news for buyers.”

“A few California counties continue to defy gravity due to what we call the ‘Google Effect’,” said Schnapp. “In July, for the first time in our records, the county with the highest median home price was San Mateo at $1.23 million, up 23.3 percent from a year ago. San Francisco County has held the most expensive county title since mid-2013 so it was a surprise to see San Mateo County topple San Francisco for the top spot.”

“Flippers are taking advantage of the double digit price increases since the beginning of the year,” said Schnapp. “The steady supply of distressed properties combined with the jump in prices has created an attractive environment for the flip investor to sell at a profit.”