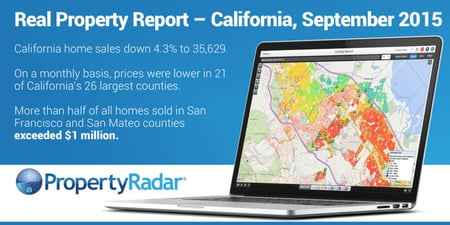 California Sales Slow in September, Down 4.3 Percent from August

Median Price Down 2.4 Percent But Remains Near 8-Year High

CALIFORNIA, OCTOBER 21, 2015 - Seasonal forces pushed California single-family home and condominium sales down 4.3 percent to 35,629 in September from a revised 37,227 in August but were up 5.8 percent from 33,674 in September 2014. Driving the increase in year-over-year sales was the 9.4 percent increase in non-distressed property sales.

“Despite the increase over 2014, when you step back and take a look at sales volumes over a longer period of time, they remain weak,” said Madeline Schnapp, Director of Economic Research for PropertyRadar. “Lack of inventory and declining affordability are holding sales back.”

“Price appreciation in many parts of the state has slowed or stopped,” said Schnapp. “On a monthly basis, prices were lower in 21 of California’s 26 largest counties.”

The counties with the largest price declines were Contra Costa (-5.0 percent), Kern (-5.2 percent) and San Mateo (-3.3 percent). The San Francisco median price declined 11.8 percent for the month but we believe the decline is an artifact of the mix of homes sold rather than an actual price decline. Median prices in San Francisco are typically volatile due to the low volume of sales. Sales volumes that differ by as little as 20 from one month to the next can easily affect the median price by +/-$200,000.

On an annual basis prices are still appreciating but in general at a much slower pace. Home prices in a few northern California counties continue to appreciate rapidly but they are the exception, not the norm. Counties with the highest annual price appreciation rates were Santa Cruz (+18.1 percent), Merced (+15.0 percent), Santa Clara (+13.8 percent) and San Mateo (+11.3 percent).

“In September, more than half of all homes sold in San Francisco and San Mateo counties exceeded $1 million,” said Schnapp. “I am frequently asked, ‘how long can this continue’? My answer is, ‘Until you run out of eager buyers and bankers willing to lend,’ and we clearly are not there yet.”

“Cash does not seem to be in short supply in the Silicon Valley corridor”, said Schnapp. “So far in 2015, 21.5 percent of sales were for cash and 61 percent of buyers put down at least 20 percent of the purchase price. At median price levels bouncing off of a million dollars, that is an impressive statistic.”In other California housing news: