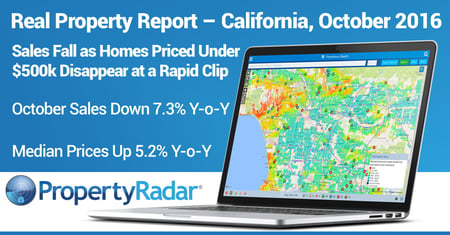 Sales Fall as Homes Priced Under $500,000 Disappear at a Rapid Clip

‍“The drag on sales is coming from the decline in houses in the $0 to $500K price range,” said Schnapp.  “That trend is being driven by several forces. Despite California’s robust economy and healthy demand for housing, years of regulatory building constraints have kept low-priced inventory from reaching the market. Meanwhile, rising prices push homes into higher priced categories pricing prospective buyers, whose real income has not kept pace with home price appreciation, out of the market.”

Within the 26 largest counties in California, on a year-ago basis, prices were higher in all but two counties. The counties with the largest annual price gains were located in the San Francisco Bay Area: Marin (+8.9 percent), San Francisco (+10.5 percent), San Mateo (11.4 percent) and Sonoma (+10.1 percent).

“Prices in the San Francisco Bay Area continue to defy current incomes,” said Schnapp. “Sales may be sluggish, but that hasn’t stopped buyers from continuing to pay nosebleed prices for housing.  Gentrification continues in the Bay Area at a rapid clip as higher income tech workers displace non-tech residents.”

“The median priced home in San Mateo County in October cost $1.25 million,” said Schnapp. “That bought you a two-bedroom, one-bath dwelling built in 1945.  For those homebuyers that can tolerate a longer commute, nearly $1.25 million bought you a beautiful 4,000 square foot luxury   home on 0.75 acres located in the Sonoma County hills.”

“Four of the five counties with the highest percentage of cash sales in California were located in San Francisco Bay Area,” said Schnapp.  “The tech economy and rapid price appreciation continue to attract cash buyers despite high prices.”

“Hopefully the need for lower priced homes is being heard loud and clear up and down the state,” said Schnapp.  “Residential investment is expected to improve going forward.  Let’s hope it’s in price categories that Californians can afford.”