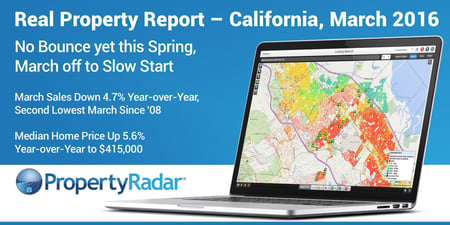 No Bounce yet this Spring, March off to Slow Start

‍“March marks the start of the selling season and sales this past month were the second lowest March since 2008,” said Madeline Schnapp, Director of Economic Research for PropertyRadar. “The lack of inventory and terrible affordability are a drag on sales. Without new inventory, sales will likely remain flat for the foreseeable future.

"Affordability and lack of inventory is a challenge in every part of the state with a decent job market. The closer you are to the coast, the worse it gets,” said Schnapp.  “As prices march steadily higher, they eventually hit a level where you run out of buyers willing to pay those prices. Are we there, yet? Probably not, but we are certainly getting closer!”

“In the past 13 months, more than half a million California homeowners have exited their negative equity position making them eligible to sell their existing home and perhaps buy another,” said Schnapp. “That means that while in March 2015 one in nine California homeowners were underwater, today that number is one in sixteen.”

‍“In the past week, the Federal Housing Finance Agency (FHFA) announced a new principal reduction program,” said Schnapp. “While it appears to offer hope for those in California still underwater, the program is so limited as to likely have little, if any, impact here. FHFA estimates that nationwide only 33,000 homeowners will benefit. This is likely the last homeowner bailout, so underwater homeowners in California still hoping for relief appear to be out of luck.”

“The 32 percent increase in Notices of Default over the past five months caught our attention,” said Schnapp. “While the increase may be seasonal, it may also be due to loan modification resets as loans from 2005 through 2007 default for the second time.”

‍“For the past year, the uncertainty of the impact of rising interest rates has been a worry for would-be buyers,” said Schnapp. “Back in January, the 25-basis point interest rate increase by the FED roiled the stock markets big-time. Stung by that reaction, we believe the FED will probably postpone further interest rate hikes until next year, particularly since this is an election year. The last thing the FED wants is a FED induced market disruption that impacts voter sentiment one way or the other.”