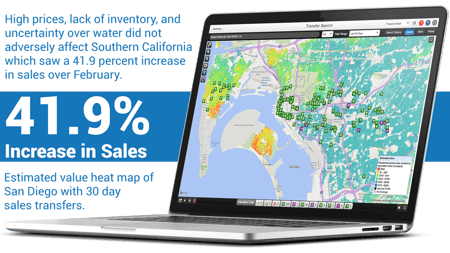 California Home Sales Not Drying Up

March 2015 California single-family home and condominium sales were 31,989, a 33.1 percent jump from 24,031 in February, the biggest March increase in three years. Driving the increase in sales was the 36.7 percent increase in non-distressed property sales for the month. Non-distressed property sales in March represented 82.8 percent of total sales, up from 79.7 percent a year earlier and a low of 24.3 percent in January 2009.

On a year-over-year basis, sales were up 8.8 percent from 29,617 in March 2014. Regionally, March sales gained 27.2 percent across the nine Bay Area counties, 41.9 percent in Southern California, and 17.7 percent in Central California.

“For the first time in 16 months, sales were higher than a year earlier,” said Madeline Schnapp, Director of Economic Research for PropertyRadar. “Pent-up demand, mild winter weather and attractive interest rates have created a wellspring of California housing market sales. Despite the California drought dominating headlines, we aren’t seeing data that suggests the drought is having a negative impact on the market. Obviously we’ll continue to monitor that closely.”

“After eight months of flat to declining prices, the surge in March sales was enough to push prices significantly higher,” said Schnapp. “Affordability, particularly in California’s sought after coastal areas, has become a big problem. The median income homebuyer in these areas can no longer afford to buy the median priced home. While inventory indicators seem generally favorable, you’d be hard pressed to find buyers who are not complaining of a lack of available homes for sale.”

“The surge in Notices of Trustee Sale may be indicative of renewed interest by financial institutions to liquidate foreclosure inventory in order to take advantage of prices nearing pre-crisis levels,” said Schnapp.

“As much as we would like to think otherwise, the March surge in sales is likely transitory,” said Schnapp. “High prices, lack of inventory, and uncertainty over water and snow are not going away anytime soon and will likely keep a lid on sales.”

‍California real estate data presented by PropertyRadar, including analysis, charts, and graphs, is based upon public county records and daily trustee sale (foreclosure auction) results. Items are reported as of the date the event occurred or was recorded with the California County. If a county has not reported complete data by the publication date, we may estimate the missing data, though only if the missing data is believed to be 10 percent or less.