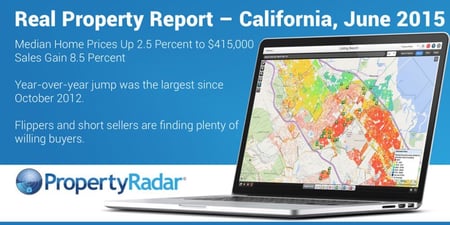 CALIFORNIA, JULY 15, 2015 -- California single-family home and condominium sales gained 8.5 percent to 41,539 in June from 38,143 in May. On a year-over-year basis, sales were up 16.4 percent from 35,681 in June 2014. Driving the increase in sales was the 19.9 percent year-over-year increase in non-distressed property sales. Of note to investors, distressed property sales volume has remained nearly unchanged for 18 months and continues to remain a source of opportunity.

“After a mediocre May, California real estate sales took off in June,” said Madeline Schnapp, Director of Economic Research for PropertyRadar. “The year-over-year jump was the largest since October 2012 likely due to improving economic conditions and fear of rising interest rates this fall.”

“Flippers and short sellers are finding plenty of willing buyers,” said Schnapp. “With prices already high and moving higher, this market leaves room for investors to jump in and an attractive time to sell.”

California real estate data presented by PropertyRadar, including analysis, charts, and graphs, is based upon public county records and daily trustee sale (foreclosure auction) results. Items are reported as of the date the event occurred or was recorded with the California County. If a county has not reported complete data by the publication date, we may estimate the missing data, though only if the missing data is believed to be 10 percent or less.