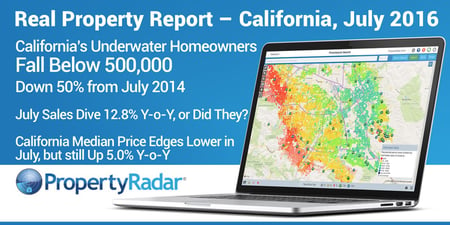 ‍“At first glance, it looked like July sales fell off a cliff,” said Madeline Schnapp Director of Economic Research for PropertyRadar. “Looking closer at the data, we noted that July 2016 had two fewer business days than July 2015. That calendar quirk was enough to depress July sales. When the missing days were taken into account, the sales decline was approximately 3.0 percent for the month and 5.0 percent for the year, in line with expectations.”

‍“With or without July’s calendar distortions, sales were tepid this past month,” said Schnapp. “June sales will likely represent the peak of the 2016 season and are expected to retreat from here on out.”

“The silver lining to rising prices is in the past two years 575,000 California homeowners have escaped their negative equity prisons,” said Schnapp. “Now armed with positive equity, these homeowners can take advantage of near record low mortgage interest rates to refinance, sell an existing home and buy a new one.”

At the county level, July median home prices in 17 of California’s 26 largest counties were flat to lower from the previous month.

“The good news for California home buyers is that median prices fell in more than half of California’s largest counties,” said Schnapp. “Despite July’s pullback, we forecast prices are more likely to trend sideways rather than materially decline.”

“Cash sales retreated this past month as the overall market pulled back from June highs,” said Schnapp. “Some of the pull-back is likely related to the July calendar quirks, but the highs for this year’s selling season are likely behind us.”