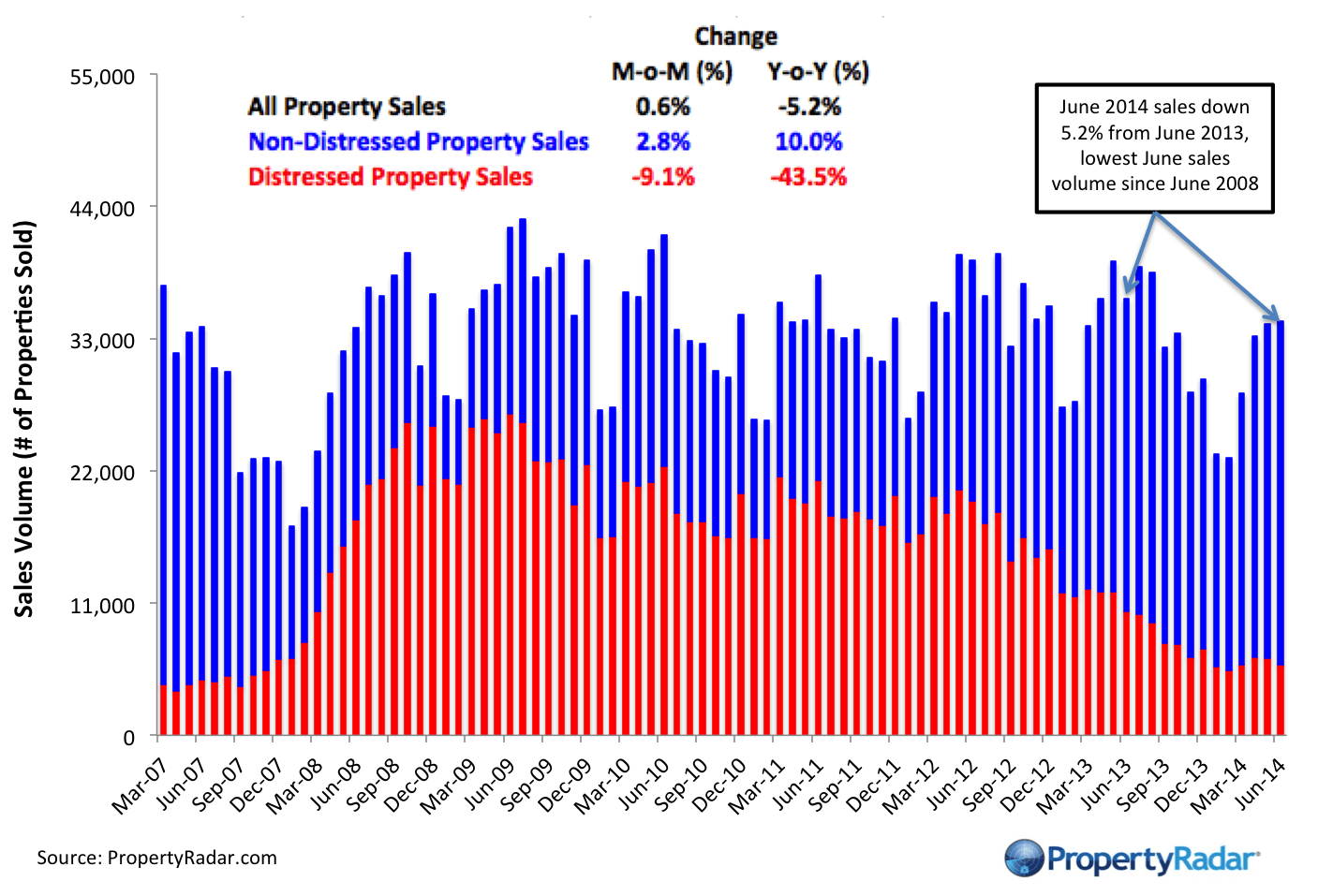 California single-family home and condominium sales gained 3.9 percent in July 2014 but were down 9.2 percent from July 2013. Year-to-date sales for the first seven months of the year are the lowest since 2008.

“Lackluster sales volumes so far this year should come as no surprise given the fact that in many California counties houses have simply become unaffordable,” said Madeline Schnapp, Director of Economic Research for PropertyRadar. “The decline in affordability in concert with the rapid decline in lower priced distressed properties for sale has exacted a toll on demand.”

The July 2014 median price of a California home edged up 1,100 dollars, or 0.3 percent, to 390,100 dollars, the slowest monthly increase since January 2014. On a year-ago basis, median home prices gained 7.8 percent. Driving the month-over-month price increase in July was the 4.4 percent increase in the sales volume of higher priced non-distressed properties, which accounted for 83.0 percent of total sales. The median price of non-distressed homes was up only 0.2 percent over last year, indicating the gain in median prices was due mostly to a shift from less expensive to more expensive homes.

“Last year’s rise in home prices and interest rates went too far, pushing homes out of reach for some,” said Schnapp. “To see prices increase further from here will require either increases in income, or easing of credit terms.“

Foreclosure Inventory - Preforeclosure inventory estimates the number of properties that have had a Notice of Default filed against them but have not been Scheduled for Sale, by month. Scheduled for Sale inventory represents properties that have had a Notice of Trustee Sale filed but have not yet been sold or had the sale cancelled, by month. Bank-Owned (REO) inventory means properties sold Back to the Bank at the trustee sale and the bank has not resold to another party, by month.‍

‍California real estate data presented by PropertyRadar, including analysis, charts and graphs, is based upon public county records and daily trustee sale (foreclosure auction) results. Items are reported as of the date the event occurred or was recorded with the California county. If a county has not reported complete data by the publication date, we may estimate the missing data, though only if the missing data is believed to be 10 percent or less of all reported data.