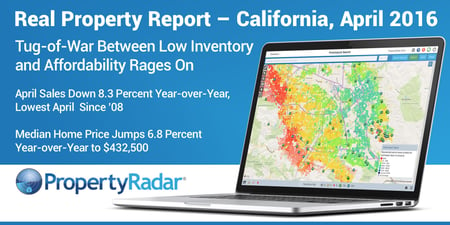 Tug-of-War Between Low Inventory and Affordability Rages On

“We are well into the spring selling season and sales volumes are still near their lowest levels since 2008,” said Madeline Schnapp, Director of Economic Research for PropertyRadar. “The lack of inventory means the tug-of-war between inventory and price will likely continue for the foreseeable future. While authorized building permits in California are approaching the highest levels since 2007, new inventory of any volume won’t arrive until 2017 or 2018.”

“Prices jumped this past month as seasonal pent-up demand slammed head-on into an inventory constrained market,” said Schnapp. “Although California is still finding buyers, there’s no question that at some point, and perhaps happening now, buyers are going to put their hands up and sit tight or even consider out-of-state options.”

“Despite low inventory and high prices, cash sales continue to be an integral part of the market,” said Schnapp. “The lure of a positive return on investment in a yield-starved environment has proven attractive to investors looking to deploy cash in real estate.”