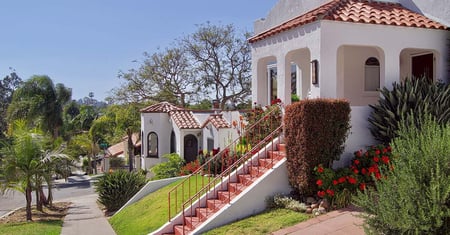 In 2004, a Brentwood, CA couple purchased a new property from a builder for $690,000 and spent the next few years adding value to the home through the interior and exterior improvements. When they later refinanced, the appraisal came in at $1,350,000, almost double the purchase price.

Fast forward a few years. The adjustable interest rate on that refinance kicked in and life intervened in other ways, as the couple decided to separate. Neither could afford the new loan payments alone, so they did what everyone recommended and called their lender to work something out. This led to 18 months of negotiations with their servicer, Bank of America, for a loan modification. They followed up monthly and were assured by the servicer that the process was moving forward, even though foreclosure notices were filed and the foreclosure sale was set and then postponed on multiple occasions.

A while back I wrote on Foreclosures and the Five Stages of Grief. If you map the grieving process to the foreclosure process, it seems to me that negotiating for a loan modification is the bargaining stage, the desperate attempt to restore better times.

Despite their efforts, the owners recently got a phone call from BofA advising them that their home would go to a trustee sale in ten days. The surprised owners asked why especially given the recent announcements that BofA would soon be offering principal balance reductions. BofA responded that the decision was final and that even if they qualified for the new program, BofA wasn’t willing to postpone the sale long enough to find out.

This story reminds me of the Peanuts™ cartoon where Lucy pulls the football from Charlie Brown as he tries to kick it. BofA led the couple to believe that a loan modification was on the way, then suddenly it pulled it out from under them. As a kid, I always felt bad for poor Charlie Brown when Lucy pulled the football. Not this time. BofA did these folks a big favor, even if they don’t yet realize it yet.

Despite the fact that loan modifications should make sense for all involved, the truth is that most loan modifications available today are even worse than the mortgages they’re replacing. Despite the recent headlines about new loan modification programs featuring principal balance reductions, a simple look under the covers reveals these new programs still fail to adequately address the core problem – negative equity. Instead, they simply put a band-aid on the fatal wounds, while telling onlookers everything will be ok.

Five years from now, as those “lucky” enough to get one of these toxic loan modifications to face the payment increases they agreed to, our Brentwood couple will have long since completed the grieving process, with worries of negative equity just a distant memory.