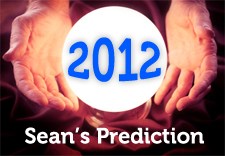 Last year I attempted to make some predictions for the coming year. I thought it would be a worthwhile exercise to take a look back at 2011 and see how I did, and then share my thoughts on what should happen in the new year.

At this time last year, I predicted the following:

‍What happened: Rates dropped in 2011. After a rise in the first quarter, the index rate dropped by 0.47 points by the end of the third quarter. Interest rates on a 30-year fixed mortgage dropped by almost one percent over the course of the year, from 4.79 in January to 3.96 in December.

‍My prediction: Lending standards will not loosen any time soon, and may tighten.

‍What happened: Fannie Mae tightened their guidelines earlier this year, no longer funding balloon mortgages and requiring borrowers to put down more money and have a higher credit score. There was lots of talk from Congress on further tightening as well.

‍My prediction: The FHA’s waiver of anti-flipping rules might expire, but shouldn’t.

‍What happened: On January 28th, the FHA extended the suspension of the anti-flipping rule. Sales to 3rd parties grow substantially in 2011. California saw an increase of 29.4 percent year-over-year, while Arizona and Nevada fared even better, with growth at 101.6 and 79.9 percent, respectively.‍

My prediction: There will be no new housing stimulus or tax credits in 2011, and the 2010 tax credits will steal demand from 2011.

‍What happened: Nothing. There were no new stimulus programs in 2011. Most markets experienced a decline in sales volume in 2011.

‍My prediction: Mortgage interest deductions will not go away in 2011, but are at risk longer term.

‍My prediction: States face unprecedented shortfalls and begin to look to property taxes to make up the difference.

‍What happened: Property taxes saw varying increases around the country, California’s Prop 13 was increasingly called into question, and many saw services cut in light of declining property tax revenue. Still total tax revenues are higher than they were pre-bubble in most areas, and the reality is that rapid increases seen during the bubble were a windfall that should have been saved not squandered.

‍My prediction: The government will continue to roll out programs that do little to help distressed homeowners.

‍What happened: More of the same. This year saw some progress on loan modifications, short sales and refinance programs, but what homeowners really need is principal balance reduction and there has been little, if any, progress there.

‍My prediction: Confidence will remain low that the housing market has stabilized due to the government’s handling of the robo-signing controversy and intervention in the foreclosure process.

‍What happened: Consumer confidence remains low, and with the budget showdown, and drama in Europe, it became clear the lack of confidence extends well beyond housing.

‍My 2012 Real Estate Market PredictionPulse Loans should make a comeback – but won’t. Back when prices were so high it didn’t makes sense to make loans at all, anyone with a pulse could get one. Now that prices, at least in some areas, are so low that we should give loans to anyone with a pulse, loans are difficult to come by. I’d rather invest my money in a home loan for a family who has strategically defaulted, then give it to a bank to use for free. Yet lending regulations essentially prohibit me, and anyone else looking for reasonable returns in a zero interest rate environment, from making those loans.In Washington DC, the politicians say that the government shouldn’t be in the business of making home loans. Yet at the same time they ratchet up lending regulations to such onerous levels that no one but the largest banks backed by government lenders or insurance would dare lend.While I predict very little change in an election year, it is still my hope that leadership will emerge to build consensus around a clear path back to a functioning housing market. A market that provides American’s both access to the opportunity to buy a home, and to the opportunity to get decent returns by investing in home loans.What is your 2012 Real Estate market prediction? Change or more of the same? We'd love to hear your thoughts.