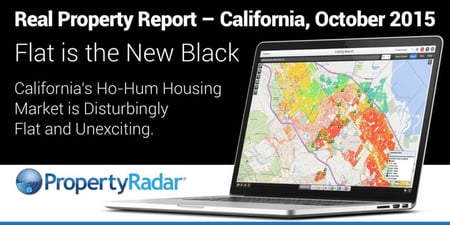 Flat is the New Black

CALIFORNIA, NOVEMBER 18, 2015 – Seasonal forces continued to exert downward pressure on the sales of California single-family homes and condominiums. October sales fell 2.9 percent to 35,182 from a revised 36,232 in September.

On a year-ago basis, sales were down 1.0 percent from 35,541 in October 2014. October 2014 had one extra sales day than October 2015, and if you remove that extra day then sales were essentially unchanged.

Year-to-date sales through October 2015 were up 6.5 percent compared to the same period in 2014 buoyed by strong sales in the first half of the year. Despite the increase, sales remain 30 to 40 percent below 2002 through 2006 sales volumes.

‍“Flat is the new black,” said Madeline Schnapp, Director of Economic Research for PropertyRadar. “Sales posted healthy increases in the first half of 2015 relative to 2014 but beginning in July, sales weakened as rising prices began to meet resistance from prospective buyers. That scenario is unlikely to change anytime soon.”

"The California real estate market has been surprisingly resilient," continued Schnapp. "Sales while weak historically, remain higher than we’d expect given limited inventory. Prices are higher than we’d expect given virtually no wage growth. Despite a terrifying drought and financial and stock market volatility, things are quite stable, if not flat out boring. Where would we be without foreign investors and money flowing in to wage growth for a few of the unicorns of the tech industry?”

“On a monthly basis, prices have fallen in 17 of California’s 26 counties,” said Schnapp. “Rapid price appreciation seen in the first half of the year has fizzled in all but a few of the most affluent counties.”

Annual price gains were five percent or less in 12 of California’s 26 counties. Of those 12 counties, six experienced annual price declines up from three in September and one in August.

“Price appreciation has definitely slowed,” said Schnapp. “As we transition into the fall and winter selling season, buyers have become more cautious and sellers more negotiable.”

‍“What a difference a year makes,” said Schnapp. “In October 2014, one in eight homeowners were underwater, today that number has dropped to one in 16. That’s half a million homeowners headed into this year’s holidays without the stress of being underwater.”

‍“It is quite possible that banks are becoming more aggressive in unloading their distressed properties via a Trustee Sale before year’s end,” said Schnapp. “While the one month jump in October does not make a trend, the potential for an increase in distressed properties for sale is good news for investors.”