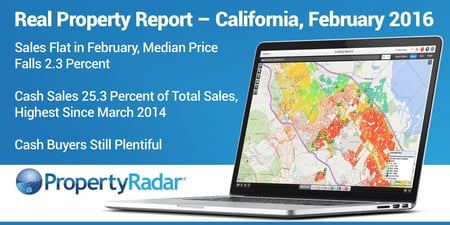 “California’s real estate market went into early hibernation starting in October 2015,” said Madeline Schnapp, Director of Economic Research for PropertyRadar. “On a year-over-year basis, sales have been remarkably flat.  That's good news because the California real estate market continues to shrug off broader national and global financial turmoil. The bad news is that resilience has translated into flat markets for the foreseeable future.”

“Lack of inventory and high prices continues to stifle activity”, said Schnapp. “Our October 2015 headline, ‘Flat is the New Black’, looks more and more likely for the rest of 2016 as economic growth slows and real wages remain stagnant.”

“Not surprisingly given current economic conditions, year-over-year price growth halved this past month,” said Schnapp. “Price appreciation has definitely slowed which is good news for a market suffering from sticker shock.”

Cash sales of single-family homes and condominiums were up 17.0 percent from January 2016 but down 1.9 percent from February 2015. February cash sales were 25.3 percent of total sales, the highest in 23 months.

“While the rest of the market went into hibernation for the winter, cash buyers came out in force at the highest level in almost two years,” said Schnapp. “Given recent price trends and volatile alternatives, buyers flush with cash are probably motivated to invest in real estate before prices rise with the spring and summer season.”

“Fortunately for the real estate markets, El Niño has made its presence known in Northern California, providing much-needed snow to Tahoe ski resorts and filling reservoirs,” said Schnapp. “With the Sierra snowpack close to or above normal, easing the statewide drought, water-critical areas such as the Central Valley and tourism-based economies, can now breathe a sigh of relief.”