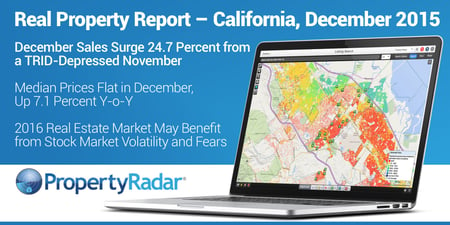 “The new FED disclosure rules (TRID) that went into effect in early October are still impacting sales,” said Madeline Schnapp, Director of Economic Research for PropertyRadar. “The new paperwork requirements slowed the mortgage application process in November pushing sales into December. The artificial TRID disruption to November and December sales data will simply be an economic footnote by end of January.”

The December median price of a California home was $412,500, nearly unchanged from the revised November price of $412,000. Home prices have been trending mostly sideways since June and are just below the July 2015 peak of $415,000.

“Sales around the holidays are typically depressed so flat prices are not a surprise,” said Schnapp. “Affordability has become a significant issue in many coastal counties throughout the state but recent stock market volatility and fear may send investors scampering to the perceived safety of real estate, putting upward pressure on prices.”

“Like we said in our October 2015 report, 'Flat is the New Black,' this ho-hum low sales volume market will likely persist into 2016,” remarked Schnapp. “Despite lackluster sales, median prices may continue to grind higher due to low inventory and increased demand from investors looking for some sort of positive yield.”

“The rise in prices is good news for underwater homeowners,” said Schnapp. “The sharp rise in median prices in early 2015 means half-million fewer California homeowners were underwater than in December 2014.”

“Cash sales as a percentage of total sales returned to normal in December after spiking in November,” said Schnapp. “The new FED TRID rules impacted the November data by delaying the recording of non-cash sales.”