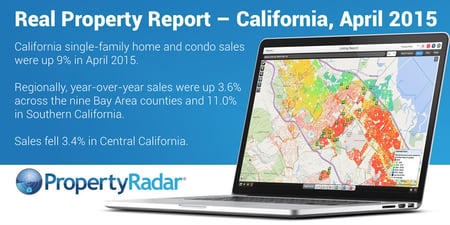 Home Sales Up 9.0 Percent from March

CALIFORNIA, MAY 19, 2015 -- California single-family home and condominium sales were up 9.0 percent in April 2015. April sales were 37,009 up from 33,946 in March. The increase in sales volume was predominantly due to the 9.2 percent gain in non-distressed property sales that accounted for 83.0 percent of total sales.

“For the second consecutive month, California property sales were higher than a year earlier,” said Madeline Schnapp, Director of Economic Research for PropertyRadar. “Year-over-year growth in sales ground to a halt in September 2013. While it is still too early in the year to say the California real estate market is off to the races, healthy job growth in the past 18 months combined with pent-up seasonal demand certainly worked to drive sales higher during the past two months.”

“For the second consecutive month, the median price of a California home was significantly higher,” said Schnapp. “Despite high prices, buyers are still stepping up to the plate to purchase homes. With the Federal Reserve on tap to raise short-term interest rates as early as September, potential homebuyers may be worried that the current environment of near record low interest rates may not last.”

Cash sales were 21.1 percent of total sales in April, down from 25.2 percent a year earlier.

“Despite the fact that nearly one-in-five sales are cash sales, the lack of lower-priced inventory is sending an increasing number of cash buyers to the sidelines,” said Schnapp. Cash purchases will likely continue to decrease in the face of rapidly rising prices.”

Foreclosure Starts, Notices of Default (NODs), were up 2.5 percent from March but were down 7.3 percent in the past 12 months. Foreclosure Sales jumped 19.2 percent for the month and were up 27.7 percent from the February 2015 low.

“The rise in Foreclosure Sales may be a sign that financial institutions are pushing to liquidate their foreclosure inventory in order to take advantage of high prices,” said Schnapp.

“In the tug-of-war between high prices on the one side and pent-up demand and low interest rates on the other, the latter appears to have the edge,” said Schnapp.

“We shouldn’t get too excited about the sales pop in March-April which are typically elevated, but if current trends continue we might start to hear the word “bubble” bandied about the water cooler. And speaking of water, with sales falling 3.4 percent in Central California, we are certainly keeping an eye out for any market affects related to the California drought.”