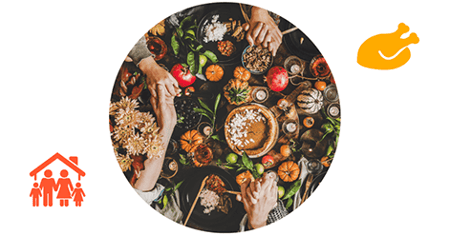 Your real estate lead list and your family at Thanksgiving... two things that you would never think of at the same time, but aren't as different as you may think.

Like family members you see every year on the third Thursday of November, your real estate leads have particular qualities that make them... unique.

Let's see how they stack up.

We all know this one. The Chatterbox is the family member who can’t stop talking at the dinner table. Then, when everyone is going to grab their second plate, they’ve barely taken a bite to eat! Their stories are endless, and even though we love them, it’s the fifth time we’ve all heard the same one…

Just like the Chatterbox, the Tired Landlord can talk your ear off. They’ve experienced so much over the years, and they can’t wait to tell you all about it. Some of their stories are so unbelievable we’re left wondering how they could be true! For best results, make sure your schedule is clear for the day when talking to them; you may need it.

The Drunk Uncle. One moment, they’re your favorite person at the party. The next, they’re back on everyone’s nerves. Either way, one thing’s for sure - you know they’ll have a drink in their hand. While the Drunk Uncle is lovable, they always seem to have a hard time handling their alcohol. They may even grab some turkey off your plate when you're not looking!

In the same way that last drink crept up on the Drunk Uncle, Properties with Liens have had their debt creep up to a point past it being manageable.

Did you hear that? No, it wasn’t a mouse! It was the Shy One whispering hello as they snuck in the back door. When they arrive at dinner, they’ve already taken their seat. When it’s time for dessert, they’ve been able to make it through without saying more than a few words… but that’s how they like it.

Preforeclosure isn’t fun. When reaching out to these leads, don’t expect them to be open right off the bat. They may be embarrassed and not want to draw attention to themselves. However, if you build rapport with them, they’ll warm up to the conversation and eventually engage with you!

Raise your hand if you’re guilty of this! We definitely are. The Third Plate is a notorious eater, making sure that they’ve tried every dish (multiple times) while still somehow having room for dessert. Think you’re getting that last piece of turkey? Think again, the Third Plate has already laid claim to it. Seriously, where does all that food go?

Like the Third Plate, Banks look out for themselves first and foremost. To Banks, properties are simply assets they want to get rid of. They’re greedy and look at every transaction as strictly financial, so don’t expect them to look out for anyone but themselves!

The Extrovert. The life of the party. No matter the conversation, they have something to say or a story to tell. They’re typically all over the place. One moment, they’re laughing with the Drunk Uncle, the next they’re back in line for food with the Third Plate. But, no matter the situation, you’ll know you’ll see The Extrovert right in the middle of it.

Is that stuffing gluten-free? Is that Turkey free range? Is that cranberry sauce made from organic cranberries? If the answer to any of these questions is “no”, the picky eater will seriously reconsider coming to the party. Not to worry, however, they brought their own food with them! Wait, isn’t that the same thing they brought last year?

Zombie properties are far and few in between, but they are very specific. Their property is facing foreclosure, but the owners have walked away from their financial responsibilities. Is the situation they're facing less than ideal? No problem, they’ll leave it to someone else to figure out!

Those Black Friday deals aren’t going to buy themselves! The Shopaholic can be found heads down at the table scrolling to find the best deals. 50% off a TV? Gotta have it. 25% off that new lawnmower? In the cart. There’s no such thing as a sure thing… except the Shopaholic leaving Thanksgiving dinner early to wait in line at 3:00am for their favorite store to open.

Flippers love a good deal. So much so, that they’ll stand in auctions all day to find the best one. Flippers are notorious bargain hunters, and the name of their game is to find the best deal possible. No matter the time of day, if a Flipper spots a good price, they’re all over it.